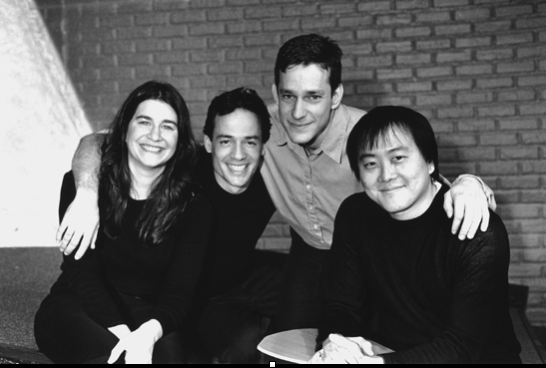 Jeffrey Solomon and Emily Joy Weiner met in 1998 as teaching artists working together in New York City schools. They were saddened by the amount of homophobia they witnessed and wanted to create a piece of theater that spoke to the isolation of LGBTQ+ students and educators.

In partnership with the Boston chapter of GLSEN, one of the largest grassroots organizations in the U.S. working to make schools safe and inclusive, Emily and Jeff set off on a creative development journey that included extensive interviews with young people and educators around the country.

During one of those interviews, they spoke to a lesbian teenager in New Haven, CT, and asked her about her role models. Having never had an adult gay role model, she talked about the impossibility of envisioning her own future life as an adult. She said:

“It’s like trying to imagine your future taking place on the Moon. How can I picture what my house would look like on the moon? I’ve never been to the moon. Nobody’s ever tried to build a house at such low gravity. How do I know whether to picture it on the surface, or floating? Trees and grass, or just rocks?”

Inspired by this metaphor, the play was titled BUILDING HOUSES ON THE MOON. The production has appeared nationally over the last two decades at schools, theaters, conferences and other community settings – a rich tapestry depicting the lived experience of LGBTQ+ students and educators.

Not only did this young woman name our inaugural play, but her articulation of the need for this kind of storytelling led to the name of our theater company. She captured the essence of our mission in a metaphor. By telling previously marginalized stories, we were ‘building a house on the moon.’ We create a safe place for new stories to be told and heard in previously alien, uncharted or even hostile terrain.

The process of creating BUILDING HOUSES ON THE MOON was as important as the end product. By partnering with the Boston chapter of GLSEN, and taking the time to build relationships with students and educators, they were able to connect students to resources, and begin critical conversations in schools around homophobia. The impact of the work was urgent and necessary, and they wanted  to replicate this model with other untold stories. Houses on the Moon Theater Company was born.

Over the last two decades Houses on the Moon has created and developed ten original pieces of theater that all speak to our mission of amplifying the unheard voice. Our work is presented Off Broadway as well as in non-traditional theater settings nationally such as libraries, hospitals, community centers, schools and more. Read more about our projects here.

Critical to our mission is reaching underserved audiences, many first time theater goers, by providing a subsidized ticketing program that excludes none. All of our work has the dual purpose of presenting quality artistry as well as using our work as an educational tool.